A Reading Update and Some New Books

Yesterday I voted in the British Columbia provincial election. I found it very interesting that for my riding anyway, there is no Progressive Conservative candidate. I don't know if it's because the NDP premier announced the election very quickly and they didn't have a chance to have a candidate in place or if they just don't think they can win any seats provincially. I'm not sad about it, but it's neat that the Liberals or maybe the Green Party are the parties to the conservative side of the spectrum. 😅 It's a relatively small community here but it took me all of 5 minutes to cast my vote in the advance polls, even with Covid protective measures in place.

So this will be a relatively short post; a review of the book I finished most recently, the synopsis of the next book in line. I'll also provide synopses of some new books. I received one in the mail and when I dropped off some books at my local used books store, I found some in series I'm working through. 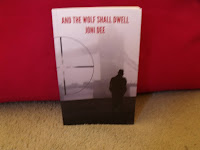 "And The Wolf Shall Dwell is the debut novel by English writer Joni Dee. It's an entertaining, well-crafted spy story.

Retired MI6 agent Adam Grey receives a call from an old source, who works in the Polish embassy. He tells Adam of a plot that has far-reaching consequences and asks to meet with him the source, on his way, discovers he is being followed by other agents within the British spy service and hides his information somewhere on the underground. Before he is killed he passes on the info to a stranger, computer analyst, John Daniel.

This meeting will be the cause of an eventful couple of weeks as Daniels and Grey meet and work together to find out who in the British government might be acting against British interests and are trying to put them out of action. There are few people who can be trusted; a couple of contacts within the spy service, and the small group must find out who is behind Grey's source's murder as well as put them out of action. Shadowy forces hide in the background; a Russian nuclear expert, fanatical Muslim activists, an Israeli spy / fixer, people within the British spy service and government. How high up is the betrayal?

It's an entertaining read. While Grey and Daniel are the 'main' characters, their roles sometimes get subsumed by others in the story; watcher Liz Shaw, detailed to keep an eye on Daniels and Grey; government intel expert Ollie Jones, trying to cover his ass and also discover the moles in the government; reporter Katie Jones, trying to find the story of what is going on; Sammy, the Israeli fixer sent to London to sort things out.... In some ways it's hard to really grasp on to a specific character but it's the type of story it is. It moves seamlessly from one to another as the plot advances. There is sufficient action to keep spy thriller readers satisfied and there is some spy-craft as well, lots of nice tidbits. The ending might have been somewhat pat and it nicely left the door open to more books about a possible team of Grey and Daniels. We'll see. Enjoyable read and satisfying debut (3.5 stars)" 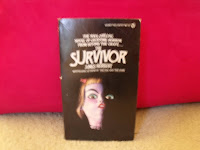 1. The Survivor by James Herbert (1976). I have enjoyed exploring Herbert's look at the horror genre.

"It had been one of the worst crashes in airline history, killing over 300 people and leaving only one survivor. Now the dead were buried and the town of Eton tried to forget. But one man could not rest.

Keller had walked from the flames of the wreck, driven on by unseen forces, seeking the answer to his own survival. Until the town was forced to face the shocking, dreadful truth about what was buried in the old graveyard. And a truth Keller did not want to believe . . ." 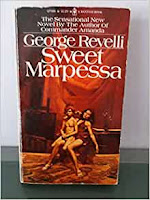 Whatever she is, Marpessa swill conquer you. She's the First Lady of the international boudoir olympics and her unusual talents set an all-time record for uninhibited sensuality."

"In this prequel to The Bookseller, former FBI profiler Hugo Marston has just become head of security at the US Embassy in London. He’s asked to protect a famous movie-star couple, Dayton Harper and Ginny Ferro, who, while filming a movie in rural England, killed a local man in a hit and run.

The task turns from routine to disastrous almost immediately. Before Hugo even meets them, he finds out that Ferro has disappeared, and her body has been found hanging from an oak tree in a London cemetery. Hours later a distraught Harper gives Hugo the slip, and Hugo has no idea where he’s run off to.

Taking cues from a secretive young lady named Merlyn, and with a Member of Parliament along for the chase, Hugo’s search leads to a quaint English village. There, instead of finding Harper, more bodies turn up. Teaming with local detectives and then venturing dangerously out on his own, Hugo struggles to find connections between the victims. Is this the work of a serial killer—or something else entirely? Knowing he’s being tailed, the killer prepares for the final, public act of his murderous plan, and Hugo arrives just in time to play his part. . . ."

"Porsche-driving Lucas Davenport, who has just returned to duty after recovering from a serious gunshot wound, is charged with saving the political life of Rose Marie Roux, the ambitious police chief who has her eye on a Senate seat. He's given the assignment of tracking to ground the sex-crazed perpetrator of a series of murders of young women. Davenport's unwelcome colleague in this case is feminist Meagan Connell, an abrasive State Bureau of Criminal Apprehension investigator who's obsessed with catching the killer before she dies of cancer.

Also bedeviled by the ill-timed assignment of a new partner, a yuppie who was formerly assigned to the grade schools as "Officer Friendly" and who happens to be the husband of the mayor's niece, Davenport is additionally saddled with the mystifying death of an elderly woman who died rather conveniently, freeing some local hoods to profit from a real-estate scam.

The killer is dropping bodies all over the metropolitan area ... and makes the mistake of becoming a little too obsessed with a potential victim and thus leaves a trail that Davenport and his fellow officers finally discover."

3. The Miracle at Speedy Motors by Alexander McCall Smith (#1 Ladies' Detective Agency #9). I do need to get back to reading this series. I enjoyed it so much.

"Under the endless skies of Botswana, there is always something Mma Ramotswe can do to help someone and here she finds herself assisting a woman looking for her family. The problem is the woman doesn't know her real name or whether any of her family members are still alive. Meanwhile, Mma Makutsi is the recipient of a beautiful new bed that causes more than a few sleepless nights. And, at Tlokweng Road Speedy Motors, Mr. J.L.B. Matekoni has come under the influence of a doctor promising a miracle cure for his daughter's medical condition, which Mma Ramotswe finds hard to accept. Nonetheless, Precious Ramotswe handles these things in her usual compassionate and good-natured way, while always finding time for a cup of red bush tea."

"After rescuing the President from kidnappers, Navy SEAL turned Secret Service Agent Scot Harvath shifts his attentions to rooting out, capturing, or killing all those responsible for the plot. As he prepares to close out his list, a bloody and twisted trail of clues points toward one man—the world’s most ruthless terrorist. One problem remains: Harvath and his CIA-led team have no idea what the man looks like. With no alternative, they are forced to recruit a civilian—a woman who has survived a brutal hijacking and is now the only person who can positively identify their quarry. From the burning deserts of North Africa to the winding streets of Rome, Harvath must brave a maelstrom of bloodshed and deception before a madman’s twisted vision engulfs the world in the fires of all-out war."