Since the start of 2016, I've been vetting my library. The main reason for this activity is that my database program, which kept track of all my books, where I purchased them, where they are located in the house, etc., crashed. So partly because I don't mind making lists and also to give an opportunity to try and make a bit more space on our bookshelves, I've been making a new database. Part of the process has been to review my books and see if I really, really, really want to keep them. Of course I do, but, having said that, I can afford to trade in a bunch and reorganise my shelves and make space for new arrivals.

So since the beginning of the year, I've managed to cull 60 books off the shelves in the den, plus sundry others that I've read since the year started and that I felt weren't really worth keeping. However, I've also managed to purchase a few new books. I can't just go to my used book store, Nearly New Books in Comox and drop off books. I do like to do a bit of a search while there as they do have a pretty regular turnover in their stock and I always manage to find something.

So since the beginning of the year, while I've culled 60 books, I have also purchased 18 books. I think that's not a bad exchange. Not all of the books have been purchased from Nearly New. I've ordered a few on line and also bought one from the New Book store in Courtenay, The Laughing Oyster.

Below are the first books obtained in 2016 - 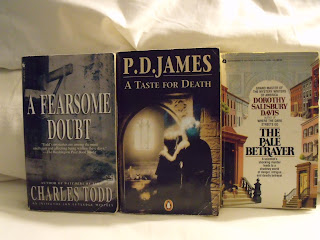 Of the three books here, two are from series I've already started. P.D. James writes the Inspector Dalgliesh mystery series, one I've enjoyed so far very much. The stories have been intelligently written, with interesting characters and plots. A Taste for Death is the 5th book in the series and involves murders in St Matthew's Church, Paddington. Charles Todd is actually the pen name of American mother / son writers Caroline and Charles Todd. A Fearsome Doubt is the 6th book in the Inspector Ian Rutledge mystery series. The series is set post-World War 1, with Rutledge returned as a Scotland Yard police inspector. I've read the first book in the series so far and enjoyed very much. Dorothy Salisbury Davis is a new writer for me. Davis was born in 1916 and was a relatively prolific writer. The Pale Betrayer was written in 1965 and has a very interesting synopsis. 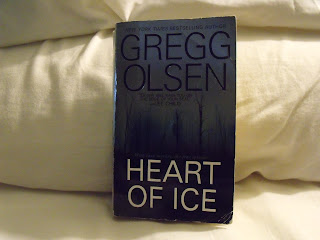 Gregg Olsen is an American author who has written both true crime novels and mysteries. Heart of Ice was written in 2009 and deals with the discovery of 3 bodies in 3 different towns. This is my first mystery by Olsen. 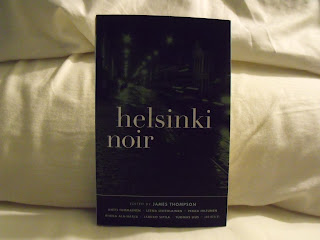 Akashic Books has produced a Noir mystery series featuring authors in various locales. The series started in 2004 with Brooklyn Noir. In 2014, the series moved to Finland to feature stories by a variety of Finnish mystery writers, hence Helsinki noir. I've read quite a few of the Scandinavian mystery writers, but none as of yet from Finland. This should provide a nice preview of their best. 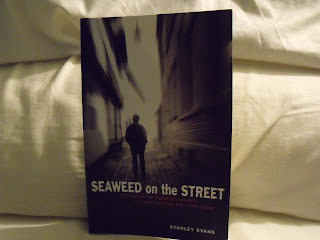 I do like a good Canadian mystery writer; L.R. Wright, Louise Penny and Giles Blunt are some of my favourites. I saw this series on the shelves at Nearly New Books and it seemed interesting. I thought I should at least try the first in the series by Stanley Evans, Seaweed on the Street. The series is set in British Columbia and features Coast Salish detective Silas Seaweed. The synopsis makes the story sound nice and gritty. 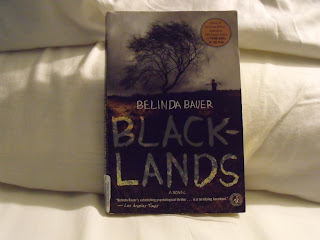 I don't know where I heard of Belinda Bauer, probably in the back of one of my other books, but her stories sounded quite interesting. Bauer grew up in England and South Africa and has written a number of crime novels, starting with 2010's Blacklands, which is set in the moors of a small English village and deals with a serial killer. Sounds quite interesting. 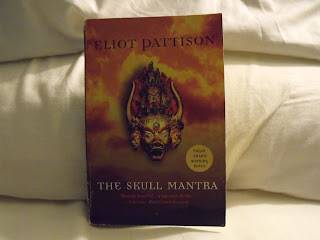 I have liked a number of mysteries set in the Far East; the Bangkok mysteries of John Burdett, the Cambodian coroner series of Colin Cotterill and the Inspector Zhang Fong mysteries of David Rotenberg. One of my Goodreads acquaintances recommended another series set in Tibet and featuring disgraced police inspector Shan Tao Yun. The Skull Mantra, written in 1999, is the first book in this series by American author, Eliot Pattison. 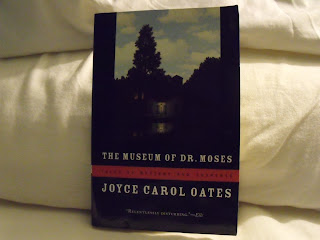 Joyce Carol Oates is an author I've looked at before but never been tempted to try her books. Until recently that is. In the past few months I've picked up a couple of her books to see if I like her writing style, as she has been a prolific, respected author. The Museum of Dr. Moses was originally published in 2007 and features 10 suspense stories. I guess I'll finally get a chance to experience her writing style. 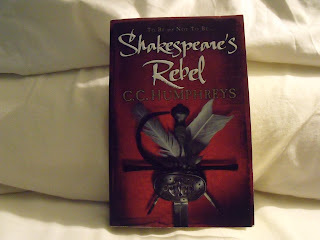 I have read one book by C.C. Humphrey before, The French Executioner and enjoyed it a lot, a nice historical adventure. Shakespeare's Rebel is set in 1599 and features England's finest swordsman, John Lawley, who is responsible for staging the fight scenes at London's new theatre, the Globe. Remember now this is fiction.. :0) 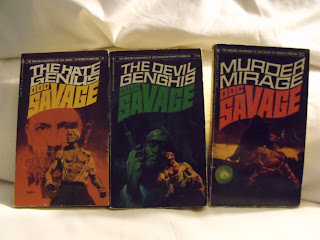 Back in my high school days, I remember enjoying the Doc Savage series of adventures by author Kenneth Robeson. Kenneth Robeson was the house name for the Street & Smith publishers and many authors used the name while writing for the publisher. Lester Dent wrote most of the Doc Savage stories. There were a total of 181 Doc Savage stories, starting in 1933. The Hate Genius was originally published in 1945, The Devil Genghis in 1938 and Murder Mirage in 1936. Basically Doc Savage was a larger than life superhero; a scientist, super physically fit specimen and he had a team of experts who followed and assisted him faithfully as he fought many, many super villains. Great stuff. 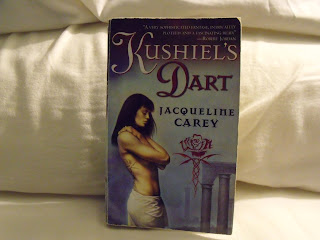 Kushiel's Dart is the first book in Jacqueline Carey's Terre d'Ange fantasy series and follows the story of a courtesan in an alternate fantasy world. "Set in a world of cunning poets, deadly courtiers, heroic traitors, and a truly Machiavellian villainess, this is a novel of grandeur, luxuriance, sacrifice, betrayal and deeply conspiracies." Sound like fun?.. I think it might be. 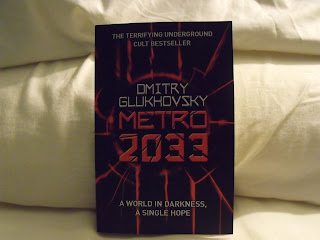 I saw Metro 2033 when I was looking through the Science Fiction section of the Laughing Oyster. Originally published for free on line by Russian writer Dmitry Glukhovsk, it has since been followed by Metro 2034 and Metro 2035. Set in 2033, it features a world reduced to rubble where some survivors live on in the Moscow Metro system and must fight to maintain their lives. The synopsis just grabbed my attention and I had to give it a try. 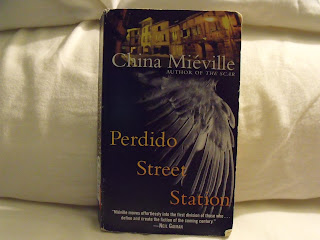 China Mieville is an English fantasy writer from Norwich. I've been starting to check out more SciFi and Fantasy the past few years. It used to be my favourite genre, but was gradually supplanted by mysteries. However it's been nice to start delving into this genre again. I've discovered some great new writers and also have been trying some of the old favourites again. Once again, I saw China Mieville's name in one of my books and the story sounded interesting. I've read the synopsis a couple of times now and have no idea what the story will be like. It just sounds interesting. The best thing about Science Fiction and Fantasy are the new worlds and people you get to meet. I hope Perdido Street Station provides this adventure. 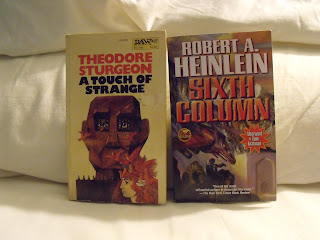 Robert Heinlein,1907 - 1988, and Theodore Sturgeon, 1918 - 1985, represent the old school of Science Fiction writers. I've read a few of Heinlein's works; The Moon is a Harsh Mistress, Stranger in a Strange Land, The Puppet Masters, Starship Troopers, Friday, etc. He is one of the great story tellers. I've purchased some of his other works in the past few years and enjoyed them just as much. Sixth Column was originally published in 1949. Unlike Heinlein, I don't believe I've read any of Sturgeon's works, unless I previously read some of his short stories. I thought I should finally give him a try and found this book of his short stories, A Touch of Strange, originally published in 1958.

So there you go, my update is complete. I will definitely try to be good for awhile. Maybe I'll wait for the next Rotary Club Book Sale in March before I buy any more, but you never know.. Enjoy your week and check these books out.
Posted by Bill at 14:39 No comments: