My Ongoing Look at my Favorite Authors

Just a quick post on this hazy Sunday. I can't imagine what they are going through in California, Oregon and Washington state. Since yesterday we've had a low lying haze over the valley. It's much cooler but the sky has this strange orange color and when I take the dogs out for their abbreviated walk, you can taste the air. The only good thing about it is that it's much cooler. I hope there is rain all along the coast next week. If you believe in the power of prayer, please pray for the West Coast of the US.

On that note, here is my ongoing look at my favorite authors.

English author, Daphne du Maurier, Lady Browning, was lived from 1907 -1989. She has written some classics of English literature. My first and only exposure to her writing for the longest time was a fantastical, time -travel story of sorts, a story that is fueled by the protagonists drug use; The House on the Strand. It's a story that I've read a few times and it's included below. I avoided trying any others of her books for the longest time; I guess I thought they were 'women's' stories. Yes, forgive me please. But since 2000 I've explored others of her books and am so glad that I have. What a great story -teller and author. 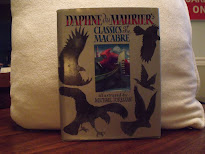 "Classics of the Macabre is a collection of short stories by Daphne du Maurier. I had previously read another collection; The Blue Lenses and other books by du Maurier; The House on the Strand and Rebecca and the more I read, the more I've enjoyed her stories and writing style.

Classics of the Macabre contained a couple of stories I'd already read from The Blue Lenses, but I scrolled through them again to remind myself about how much I'd previously enjoyed them. This book contained 6 of her short stories; Don't Look Now, The Apple Tree, The Blue Lenses, The Birds, The Alibi and Not After Midnight. I was particularly interested reading The Birds as I've enjoyed the movie many times. It didn't disappoint and had a similar theme to the movie (obviously, I guess), but was more focused on one particularly family in England. The ending was also not quite so optimistic.

Each story was interesting, not scary really, just odd and strange. Don't Look Now is set in Venice and tells the story of a young couple getting over the loss of their daughter and people they meet who seem to have the ability to see spirits. The Apple Tree tells of a husband who ignores his wife even to her death and is haunted by an apple tree (his wife's spirit?????). The Blue Lenses (a favorite) tells of a woman who has an eye operation with interesting after effects. The Birds tells of an invasion of England by birds, birds and more birds. The Alibi is another tale of a husband who is tired of his life and wants something more exciting... and finds it. Not After Midnight is the story of a man's visit to Crete on a solitary vacation who is caught up in a strange situation.

du Maurier is an excellent story teller and her tales are always unique. Well worth trying (4 stars)"

"An interesting collection of short stories by the author of Rebecca and The House on the Strand. The book was published in 1959 and contains 8 stories, each different and unique in its own right. I particularly liked The Alibi and The Blue Lenses; the first about a man trying to get some excitement into his life and finding that his plan takes an unexpected turn to the left and the second, almost science fiction, a strange tale of a woman seeing life through new lenses, a very strange and disturbing vision. The Pool and The Archduchess were good, but missed the mark somewhat from my perspective. But all in all, an excellent, well-written book. It's continued to whet my appetite for more du Maurier fiction. (4 stars)"

"Richard Young, tired of his life as a publisher, bored with his wife Vita and his two stepsons, is staying in his scientist friend Magnus' house in Cornwall. Magnus has developed a new hallucinogenic drug which Richard tries. His trips on this drug take him back 600 years as invisible witness to lives more exciting than his own, whose fascination begins to have repercussions in the "real" world.

Daphne du Maurier skillfully intertwines the lives of Richard in the present and Roger Kylmerth, his alter ego, in the past, so that two stories unfold simultaneously, both leading to separate, but related, deaths and disasters. Her description of the Parish of Tywardreath in Cornwall in the present and in the past possess an unforgettable vividness." (5 stars)

4. My Cousin Rachel (1951).
"I've read a few books by Daphne du Maurier the past few years, short story collections, Rebecca and I'm growing to enjoy her stories more and more. My Cousin Rachel was another excellent story, even if it was kind of depressing.
Ambrose Ashley who has raised his cousin Philip since a child, has to start spending winters on the continent (Italy) due to health issues. Philip stays at the estate in Cornwall and runs it in Ambrose's absence. The two are confirmed bachelors who live a staid, comfortable existence, managing the estate, spending time with relatives and local friends and both are very satisfied.
A surprise is in store for Philip. He gets a letter from Ambrose stating the Ambrose has married a distant cousin that he has met in Italy. Rachel is a widow, previously married to Count Sangalletti. Philip's life is turned upside down, especially when follow-on letters from his cousin seem to indicate that Ambrose's health is deteriorating and that he suspects that Rachel might have poisoned him. Philip goes to Italy to see to Ambrose, only to discover that Ambrose is dead and that Rachel has disappeared.
Returning to Cornwall, Philip soon receives a visitor, that being Rachel. Thus begins a strange, winding suspenseful story. Philip's anger at Rachel changes the longer she stays in Cornwall. It's a story with twists and turns, suspicions of Rachel's motives and actions, suspicions from Philip's godfather and his daughter about what Rachel wants. Philip wanders from love to confusion. Clues pop up, discovered Ambrose letters, a visit from Rachel's friend from Italy, Rainaldi. Philip must reconcile his strong feelings for Rachel with disturbing concerns that she might have murdered his cousin.
I don't think the story is as great as Rebecca but it's still an excellent, suspenseful dramatic work of fiction (4 stars)"

5. Rebecca (1938). This story also made it into my Top 100 books.
"Wow! I cannot believe it's taken this long for me to pick up this book and read it. I had read The House on the Strand a few times and enjoyed, but for some reason, I've never read anything else by du Maurier, maybe some misguided feeling that it was 'chicklit'. I'm glad that I've started exploring more and more classic and modern classic fiction.
This was a fascinating story, well-crafted, intelligently written and a page turner. At first I was irritated by the new Mrs. de Winter, her naivety and innocence, but as I read more, her character made more sense; a young woman with little life experience and low self-esteem. Marrying the older Maxim de Winter, an experienced but damaged and withdrawn individual didn't help her attitude, even with how much she loved him. Being placed in a strange, almost other worldly situation as the new mistress of de Winter's estate of Manderley, which had been run masterfully by his first wife, Rebecca, added to her discomfort. Throw into the mix, the house keeper, the creepy Mrs. Danvers, who seems to resent the new lady of the manor and you've got a tense, fascinating situation.
The story builds and builds (I won't spoiler this for anyone who hasn't read before... even though I think I'm probably one of the few who hasn't) and draws you in. Such an excellent story. I've discussed with the missus as I've progressed and now will have to sit down with her and watch the movie version. (5 stars)"
I have two other du Maurier stories on my bookshelf; Jamaica Inn (1936) and The Glass Blowers (1963). I'm looking forward to continuing my exploration of her work. The complete listing of du Maurier's stories can be found at this link. Have a great, safe week!
Posted by Bill at 13:01