My second post today. I've been on a bit of a reading binge, trying to finish off some of my Challenge books before the end of the month. So I thought I should update the books I've finished, provide the synopses of those I'm starting and also the synopses of a couple of books that arrived in the mail in the past two days. I'll get back to my look at my Favorite Authors in an upcoming post. It might be a couple of days as I'll also be doing my end-month stats either the 31st of Jul or on the 1st of Aug.
So let's get on with it, eh?
New Books

1. Dragonsdawn by Anne McCaffrey (1st Chronicles of Colony of Pern).
"The beautiful planet Pern seemed a paradise to its new colonists - until unimaginable terror turned it into hell. Suddenly deadly spores were falling like silver threads from the sky, devouring everything - and everyone - in their path. It began to look as if the colony, cut off from Earth and lacking the resources to combat the menace, was doomed.

Then some of the colonists noticed that the small, dragonlike lizards that inhabited their new world were joining the fight against Thread, breathing fire on it and teleporting to safety. If only, they thought, the dragonets were big enough for a human to ride and intelligent enough to work as a team with a rider...

And so they set their most talented geneticist to work to create the creatures Pern so desperately needed - Dragons!"

"In this third book in the Earthsea series, darkness threatens to overtake Earthsea: The world and its wizards are losing their magic. But Ged Sparrohawk — Archmage, wizard, and dragonlord — is determined to discover the source of this devastating loss.

Aided by Enlad’s young Prince Arren, Ged embarks on a treacherous journey that will test their strength and will. Because to restore magic, the two warriors must venture to the farthest reaches of their world—and even beyond the realm of death."
Just Finished

1. Not Much Fun: The Lost Poems of Dorothy Parker by Dorothy Parker.
"Not Much Fun: The Lost Poems of Dorothy Parker is my first experience with the 'verses' of Dorothy Parker. I readily admit that poetry is one of my least favorite genres; I just don't get it. I also readily admit that, in spite of that, I have enjoyed some authors' poetry. Dorothy Parker's book was one such.
The book includes an excellent introduction about Parker's life. A fascinating, irascible, hard living, witty woman. She preferred to call her poems 'verses' as she had an inferiority complex when it came to her work. Stuart Silverstein, who wrote the intro, compared some of her work to that of short story writer, H.H. Munro AKA Saki. Having read a collection of Saki's work, I can see the comparison. Saki's stories often started in one direction but the final outcome / ending often came out of the blue, somewhere out in left field and left you shaking your head. Parker's poems have that effect as well. A romantic work will start out in one direction but you always find yourself wondering if there will be a witty punchline.
A poem about Myrtilla, on Easter Day, starts off
"Myrtilla's tripping down the street
In Easter finery.
The Easter blooms are not more sweet
And radiant hued than she....."
It continues with lovely descriptions of Myrtilla, how she makes the men's hearts flutter.. and then ends thusly
"As down the street Myrtilla trips,
I hope she breaks her neck!"
Not all of the works are in this vein, but there were many that make me chuckle at the end. What I especially liked about her work was how accessible it was. I think that is my normal issue with poetry; I just find it difficult to get into a flow. But not with this collection. I have to say that I found myself reciting some of them to my wife to gauge her reaction. And even reading them was 'easy'. I just found myself able to see them, to get into them.
I enjoyed this collection. The first section The Poems, was excellent. The second section, The Hate Verses, was not quite so enjoyable. In them she writes a number of selections; Women, Men, Actors, etc and highlights different types of personas within each grouping and why she dislikes them. It's all in good fun, I imagine, they didn't grab my attention quite so well.
All in all, I enjoyed the collection very much. I may look for more of her works. (4 stars)

2. The Night Eternal by Guillermo del Toro (The Strain #3).
"The Night Eternal is the third and final book in Guillermo del Toro's Strain trilogy. It details the final climatic battle between a small group of human rebels against the vampire overlord, The Master the demon who controls the Earth.
It's been about 4 years since I read the 2nd book, but I found it easy to get back in with the flow of the series and to recall the events of the previous books; this was most encouraging. The Master now controls the world. He is able to monitor everything through the eyes of the countless vampires under his thrall. He now owns Zack, not a vampire, but infected with the Master's blood. The Master uses small amounts to keep Zack's asthma under control. Zack's mother Kelly, a vampire, is always around and she controls the Feelers, blind, young vamps who are used as tracking dogs.
The story follows the remains of the human resistance; Zack's father, Eph, who is lost in his desire to find and save Zack; Nora, Eph's ex-lover who is trying to keep her aging mother safe; Fet, the rat exterminator who now seems to be the team leader, searching for a weapon to destroy the Master; Gus, the gang banger; and Mr. Quinlan, the Master's son who is needs to find the book that will show where the Master was born so they can destroy him.
It's a dark, grim story. The world is covered in gritty cloud, rainy and gloomy. Only a couple of hours a day of feeble sunlight keep the vamps under cover. The Master wants to find Eph and also the Lumen Obscura, the book that will help destroy him. Eph is struggling with his guilt about Zack and is linked with the Master who is trying to make a deal with Eph. Nora is captured and sent to one of the Master's camps. Fet works with Mr. Quinlan to try to decipher the book; provided by old Mr. Setrakian, who formed the group of rebels and perished in the last book. Gus is in Iceland trying to find the weapon to destroy the Master.
The story moves along at an excellent pace. It's frustrating as the group suffers setback after setback but somehow manage to keep going. Is there a traitor in the group? Who can trust whom? It ends with a hell-bent-for-leather race to try and finally destroy the Master with everyone coming together in a climatic ending. It was an entertaining and ultimately satisfying conclusion to a dark, well-crafted trilogy. Worth trying, especially if you like a different perspective on the vampire story. (4 stars)"

3. Talking to Strangers: What We Should Know About the People We Don't Know by Malcolm Gladwell.
"Talking to Strangers: What We Should Know About the People We Don’t Know is my second book by Malcolm Gladwell, the first being The Tipping Point. Both were interesting, both outside my normal reading material. Talking to Strangers was a fascinating story.
Let's see, how to describe. I'll probably get it wrong but here goes. Gladwell looks at a number of incidents / events to look at how we interact with strangers, how we perceive them, and in these cases who the interactions go awry. His initial comments deal with Sandra Bland and he concludes the book by using it complete his theory. If you don't know, Sandra Bland was a black woman moving from Illinois to Texas who was pulled over by a police officer. Their interactions escalated and Sandra was put in jail and hung herself in jail after 3 days. Gladwell tries to analyze this to see how everything went so wrong from a simple traffic stop.
He uses the other cases to outline his theories and it is a fascinating read. He talks about Nevil Chamberlain (PM of UK just before WWII) and his meetings with Adolf Hitler and how that went so wrong; the Default to Truth, where we tend to want to believe a person / stranger rather than just be suspicious. (grossest simplification on my part). He looks at the CIA's misreading of a Cuban spy in their midst, The Queen of Cuba. Suspicious of her, she still spied on them from within for years.
Gladwell examines the Jerry Sandusky child abuse scandal and why it took so long to actually do something. He looks at the Amanda Knox case. How did the Italian police and the world's press get it so wrong? He looks at the Fraternity party case, the young man who was trying to rape the young lady by the dumpster. (If you read this book, this chapter should be must reading by both boys and girls attending university. The affects of booze and black outs struck home with me...
Gladwell has an interesting analysis of suicide, using the Sylvia Plath example. Quite fascinating. The Case study looking at the Kansas City police experiments on policing was also fascinating and considering the issues that are making the press especially these past few months, make it also must read, in my mind. And then it all goes back to the Sandra Bland case and how did it all go so wrong.
The last sentences struck a chord as well with me. "Because we do not know how to talk to strangers, what do we do when things go awry with strangers? We blame the stranger." Of course the book has much more to offer than that last sentence. There are fascinating case studies and interpretations. Worth checking out. (4 stars)"
Currently Reading 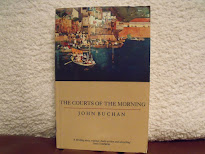 1. The Courts of the Morning by John Buchan.
"Begins in the pleasant atmosphere of a country house in the Scottish borders, where Richard Hannay is the guest of his old friend, Sandy Arbuthnot. The drama shifts to a small South American republic in the grip of a dictator."

Eduard Foxx, secret agent, traitor and the tactician who planned the assassination, meets his match in Julie Connor, a quiet, unexceptional, self-deprecating, reclusive civil servant with a secret.

For their own reasons, they each need to uncover the identity of Dominion 1431, the shadowy figure behind the assassination and unravel a complex plot to change the course of history. But nothing is as it seems and no one can be trusted in the convoluted world of political intrigue.

Foxx and Connor find themselves in a race to stop the destruction of democracy . . . or are they already too late?"

There you go folks. Any of them appeal to you?