A Reading Update and the Spy / Thriller Genre Continued 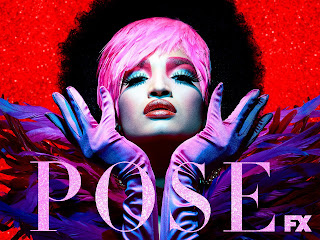 It's been a couple of days since my last entry here. The missus and I were enjoying some TV for a change. On Friday night we watched The Girl on the Train and while not perfect it was most enjoyable. I have the book and it will be one of the next ones I read. So it'll be interesting to compare the two. On Saturday we binge watched Season 1 of Pose. Quite a different show about a life style with which I'm totally unfamiliar. But it's character driven and has an excellent cast. Loved it. Sunday we watched a Miss Marple, and even though we'd seen previously, it was still entertaining. Watched the 2nd last episode of The Level. I haven't enjoyed all that much but last night's episode was ok.
This morning I finished one book and have lined up its replacement. I'll update those and also continue with my look at the Spy / Thriller novel.
Just Finished

1. Coming Up for Air by George Orwell (1939). Orwell was my June Feature Author. This is the 2nd book of his that I read.
"I've read a few of George Orwell's novels the past few years; Burmese Days, Down and Out in Paris and London, A Clergyman's Daughter, and now Coming Up for Air (1939). This is probably my least favorite. Not that it isn't well-written, as Orwell has a way with words and description. The story just left me sort of blah.

George Bowling is a 45 year old man, with a wife, Hilda, and two children and lives in a 'soulless' community of red brick houses. He works as an insurance salesman, he's overweight and dissatisfied with his life. As he looks at his life, he delves into his past, where he grew up in a rural town, Lower Binfield. He tells us of his growing up. He spends lots of time talking about the joy he had as a child of fishing and why he ultimately stopped. He tells of his first love experience and also somewhat of his experiences in WWI.

He looks to the future, the definite probability of WWII, attends an anti-fascism meeting. Ultimately George decides to sneak off and try to relive his past, to visit Lower Binfield, to try and find peace. It's this portion that closes off the story.

As I said at the beginning, Orwell knows how to lay out a story, write wonderfully. But the story kind of left me empty. I would still suggest that you try it if you're exploring Orwell's writing as he is unique as a story-teller. Don't limit yourself to 1984 and Animal Farm. (3.5 stars)"
Currently Reading 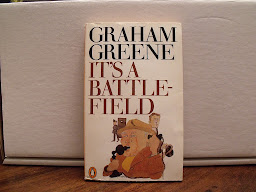 1. It's a Battlefield by Graham Greene (1934). My July Focus author will be Graham Greene. This will be my first book.
"Drover, a Communist bus driver, is in prison appealing his death sentence for killing a policeman during a riot at Hyde Park Corner, a policeman he thought was about to club his wife. A battle rages to save Drover's life from the noose. The Assistant Commissioner, high-principled and over-worked; Conrad, a paranoid clerk; Mr. Surrogate, a rich Fabian; Condor, a pathetic journalist feeding on fantasies; and Kay, pretty and promiscuous — all have a part to play in Drover's fate."
The Spy / Thriller Genre - James Mayo
Stephen Coulter was an English author born in 1914. Under the pseudonym James Mayo he wrote a number of spy novels, some featuring British spy Charles Hood. There are 5 books in the Charles Hood series. I have read the first book in the series and have two more on my bookshelf.

1. Hammerhead (1964).
"Hammerhead by James Mayo is the first book in his Charles Hood spy series. Mayo is a pseudonym for Stephen Coulter and he wrote a number of novels under both names. There were 5 books in the Charles Hood series. I became interested in trying it when I saw Mayo's name listed at the back of another 60's spy novel I'd read, The Dolly Dolly Spy by Adam Diment. Since I started re-reading the James Bond books, I've become interested in this whole genre; the larger than life spy set in the 50's and 60's.
Charles Hood is a cultured man, specialist in the arts (Paintings especially) who works for the Center, a group of powerful men who are based in London. As well, he has an arrangement to work for the British government, Special Intelligence Service. This story starts with a bang and never lets up.
Hood is asked to investigate Espiritu Lobar, a secretive billionaire, who is suspected of trying to infiltrate secret NATO war plans for the enemy. This journey leads Hood from Paris to Nice where Lobar has a yacht on which there may be secret communication, spy and engineering equipment.
As well, Hood has been trying to help a man he met in Paris, right at the beginning, a cat burglar named 'Tookey' Arthur Tate, who disappears before Hood can help him.
The story is light on plot but heavy on action, kind of a poor man's James Bond. Hood moves from one crisis to another, his life often in danger, and leaving a trail of bodies behind him as he tries to solve the mystery of what Lobar wants and keep the free world safe. Definitely of its time, an entertaining, action-packed spy thriller. I will be trying to find the other books in the series (3 stars)."

2. Let Sleeping Girls Lie (1965).
"Charles Hood, dynamic hero of Hammerhead, tackles another breathtaking assignment. At the request of Lord Claymore, head of the City's secret consortium The Circle, he trails a lovely blonde with a Bentley across Europe.

3. Sgt. Death (aka Once in a Lifetime) (1969).
"From ashes - Hood freed one hand and before the man could move, scooped a fistful of ash down the open throat
To dust - Do you think they have a law here about kissing naked girls in the open?
From Debbie - She was standing at the open window in a pyjama top held by one button.
To Zarin - Eighteen years of sex lying on her belly in a black lace girdle and no bra.
From Lloyd Bannion - He seized Sprott's head and smashed it down again - kept smashing it down in blind fury....
To Sergeant Death - Hood felt a tearing rip through his left hand on the ground. Bannion was wielding the nailed club..."
The complete list of Coulter's / Hood's books are available at this link.
Have a great week!