Strictly about books today. It's been a nice, quiet day in with Jo and the dogs. Jo made a nice lunch, eggs, bacon, fried potatoes.. yummy...

A couple of new books arrived in the mail yesterday. I finished reading a book this morning and have started another. I'll update those and also continue with my look at the Sci-Fi novel. Today's author is Jonathan Maberry.

So let's get on with it.

New Books
One Sci-Fi and one LGBTQ fiction.

"This treasure from the golden age of lesbian pulp fiction picks up where Stranger on Lesbos left off. Deserted by her butch lover, Frances struggles to re-integrate into conventional married life. But no amount of resolve can keep her away from a new lover, the boyish Erika who lures her back into the melodrama of lesbian life."

"In a corporate-dominated space-faring future, planetary missions must be approved and supplied by the Company. Exploratory teams are accompanied by Company-supplied security androids, for their own safety.

But in a society where contracts are awarded to the lowest bidder, safety isn’t a primary concern.

On a distant planet, a team of scientists are conducting surface tests, shadowed by their Company-supplied ‘droid — a self-aware SecUnit that has hacked its own governor module, and refers to itself (though never out loud) as “Murderbot.” Scornful of humans, all it really wants is to be left alone long enough to figure out who it is.

But when a neighboring mission goes dark, it's up to the scientists and their Murderbot to get to the truth." 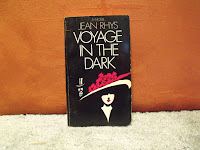 "Voyage in the Dark is the 2nd story by Jean Rhys that I've read. It is a moody, depressing tale. Anna is an eighteen year old girl who has moved to London from a Caribbean island. She has worked as a chorus girl, traveling around England and then finds herself a male companion. The story is set 1913 / 1914.

Anna seems to wander through life, managing to survive somehow. She doesn't seem to work but gets money from Walter. She moves from apartment to apartment, is abandoned by Walter, finds company with other men. Eventually she gets pregnant by one of her male friends.

It's all very sparsely told, Rhys moves from London and the present to Anna's life as a child in her home. You don't really find a lot out about her. I don't know. I found it difficult to relate to the story or the characters. I did feel that I'm glad I didn't grow up at that time. I have one more of Rhys's books, Wide Sargasso Sea, which is her most acclaimed book, I believe. I'm not sure what to make of Voyage in the Dark, though. (3.5 stars)"

1. The Black Curtain by Cornell Woolrich (1941). The synopsis reminds me of Memento (the movie).

"After a slight accident on a tawdry street, Frank Townsend goes home - only to discover he hasn't been there in years. Suffering from amnesia, accused of murder, and the object of a deadly pursuit, he must overcome the crime that time has thrust upon him..."

Jonathan Maberry was born in Philadelphia, PA in 1958. He is a suspense author, comic book writer, magazine editor, etc. He has written a number of horror series. I first heard of him through some acquaintances in one of my Goodreads' book groups. I had difficulty finding his books. I was particularly looking for his Joe Ledger series, a horror/ dystopic Sci-Fi series about super-human zombies, biological enemies, etc. I found a pure horror / fantasy series book first, Ghost Road Blues, a kind of Children of the Corn horror story, quite entertaining. I finally found Patient Zero, the first Joe Ledger book and enjoyed very much; action, zombies, etc. I've since read the 2nd book and have the 3rd on my bookshelf. They aren't classics by any means but if you like action, action, action, you'll enjoy these very much. 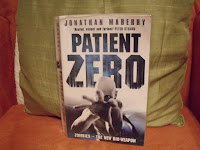 "This is the 2nd book I've read by Jonathan Maberry and the first in the Joe Ledger horror / thriller series featuring Joe Ledger, ex-Baltimore cop, ex-army martial arts expert, etc etc. Patient Zero was definitely a thrill ride. Ledger is hired by a top secret government agency, Dept of Military Sciences (DMS), headed by a mysterious personage, Mr. Church, and is immediately thrown into action with a quick response team to fight what can only be described by zombies.

These zombies have been created by a pathogen created by a combination drug expert and terrorist organization with competing goals. The threat to the US is evident and Ledger, Church and the other team leader, Maj. Grace Courtland must go into action quickly and constantly to discover the source of the pathogen, discover who might be a mole in this secret organization and at the same time keep the country from being destroyed by this pathogen. Body counts rise, action is constant and the story moves from Maryland to Afghanistan at a hectic pace.

It's an interesting story and keeps you enthralled. I enjoyed the first Maberry book, Ghost Road Blues, as well. I look forward to continuing both series. I just need to take a breath from all of the action.. (3.5 stars)" 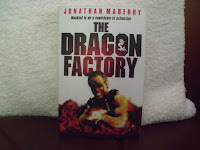 "The Dragon Factory is the 2nd book in the Joe Ledger thriller / horror series by Jonathan Maberry. If you like gunfights, genetic manipulation, monsters, Nazi enemies, etc, you'll enjoy this book.

Joe and the other members of DMS are being targeted. The President is having heart surgery and the Vice President along with other people are trying to get the NSA to shut down their operations. As well, there is an assassin killing various people who may be linked. There are two teams of geneticists plotting to destroy the world to ensure the white race will be supreme.

The story moves along at rapid pace and shifts between Joe, the DMS and the various hideouts of the geneticists. The timing is counting down the Extinction Clock. The rest of the story is action, action, action. Joe and his relationship with Grace continues to develop. The DMS teams are excellent, great teams.

The evil characters are suitably evil and the good guys are white hats. It's an entertaining, exciting story. Suspend reality and just sit back and enjoy. (3.5 stars)"


"Saturday 09:11 Hours: A blast rocks a London hospital and thousands are dead or injured… 10:09 Hours: Joe Ledger arrives on scene to investigate. The horror is unlike anything he has ever seen. Compelled by grief and rage, Joe rejoins the DMS and within hours is attacked by a hit-team of assassins and sent on a suicide mission into a viral hot zone during an Ebola outbreak. Soon Joe Ledger and the Department of Military Sciences begin tearing down the veils of deception to uncover a vast and powerful secret society using weaponized versions of the Ten Plagues of Egypt to destabilize world economies and profit from the resulting chaos. Millions will die unless Joe Ledger meets the this powerful new enemy on their own terms as he fights terror with terror."

Fun stuff. The complete listing of Jonathan Maberry's works can be found at this link.
Posted by Bill at 16:19