As the week winds down, I finished my 2nd book in November. I started it in September but it was a slow go for awhile. I really have to limit how many books I read at one time as it's easy to set some of the longer ones aside and just focus on the short ones.

I've started one new book as well, by a new author for me. I'm looking forward to getting into it.

What else has been going on? My wonderful sister sent me some pictures she took during my recent visit back home. The picture above features my Dad, me, my two brothers and my nephew. Unfortunately, it doesn't include my sister because she was the nice person taking the photo. I feel somewhat naked being the only person without a moustache, but, then again I've nothing to hide.. 😜

So anyway, in this BLog entry, I'll update the book I've completed, the one I've since started and also continue with my look at the Mystery genre, American Cops.

1. The Last Temptation by Val McDermid (Carol Jordan & Tony Hill #3). This is the 3rd book in the series that started with Wire in the Blood.

"The Last Temptation is the 3rd book in Val McDermid's Tony Hill / Carol Jordan thriller series. I will say that this was one heck of a long story but once I got into it, it kept me interested.

So the plot? Tony has retired from criminal profiling and has sort of hidden himself off in Scotland as a psychology professor and is dating another woman. Carol has moved up in the police force and is hoping for an assignment with Europol (a Europe version of Interpol). She is offered a special assignment. She looks like the girlfriend of a German drug dealer / human smuggler. She is to portray an English criminal who wants to do a deal with Radecki so that the German police and English police can end his operation.

Another story line involves a German police officer, Petra and a Dutch police officer, Marijke. They are friends who met online in a chat group for lesbian police officers. Marijke is involved in a murder case of a psychologist and Petra feels there has been a similar case in Germany. By somewhat convoluted machinations, Carol is involved with Petra in the Radecki case and introduces the two cops to Tony Hill who wants to get back into the profiling fame.

Make sense? Well, it actually does. The story moves to Berlin, where Carol is working undercover. Oddly enough, Tony goes to Berlin as well, both to help Petra with her case and to be a sounding board for Carol. Petra gets him accommodation in the same building as Carol. Do you see a potential problem there? Well, I can't say... you'll have to read it.

So the story moves along, with Carol inculcating (this is my new favorite word) herself into Radeckis operation and Tony investigating the murders. Both are interesting cases and it's also interesting how the stories come together at times.

It takes awhile to get there but the tension builds quite dramatically. I think I could foresee some of the problems.. it turns out I was right in some ways. I've always liked Carol and Tony and their friendship / relationship, but I have to say I really liked the two European cops. Marijke and Petra were excellent.

All in all a very entertaining, tense story. I look forward to finding the next book in the series. I hope it'll be a bit shorter. :0) (3.5 stars)" 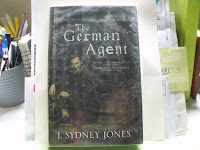 "A ruthless German spy is torn between love and duty in this powerful espionage thriller"
February, 1917. A lone German agent is despatched to Washington to prevent the British delivering a telegram to President Woodrow Wilson by any means possible. For this is the Zimmermann telegram: it contains a devastating piece of news which is sure to bring the USA into the war on the side of Britain and her allies.

Having fought in the trenches himself, Max Volkman knows that America s involvement will only prolong the slaughter of innocents and is implacable in his determination to kill the British envoy carrying the telegram. But when his pursuit of the Englishman leads him to the home of American heiress Catherine Fitzgerald, wife to one of Washington s most powerful politicians, he is presented with a terrible choice: loyalty to his comrades in the trenches or the loss of the one woman he has ever truly loved.

His decision will determine the outcome of the First World War."

My Ongoing Look at the Mystery Genre - American Cops
In my last entry on this topic I looked at Julia Keller's Belfa Elkins mystery series.

1. Archer Mayor - Joe Gunther. The Belfa Elkins series is set in West Virginia. The Joe Gunther series is set in Vermont, currently Mayor's home state. Since 1988, he has written 30 books in the series. I've read two so far and have a couple of others on my bookshelves. 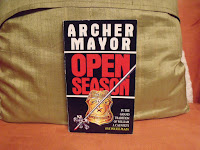 "Open Season by Archer Mayor is the first book in the Lt Joe Gunther crime series. It was initially published in 1988. Gunther is a police lieutenant in Vermont. He quickly gets involved in a number of strange incidents, including the murder or a house intruder. They seem to relate back to a murder case that occurred 3 years previously. The people involved were, so far, jurors in the case.

Gunther takes on the case and has difficulties persuading his superiors that the case is related to the trial, that possibly the suspect wasn't guilty. If this is found to be true, it will make the investigators look very bad as they were very quick with their conviction.

I found the story confusing at times, as Gunther grasps at threads to try and find out what actually happened and who the person is in the ski mask that seems to be orchestrating the whole investigation. I did find it somewhat frustrating at times but, at the same time, I enjoyed Mayor's style of writing. It is very accessible and clear. The characters are interesting and the following the course of the investigation draws you in.

Ultimately, I was very satisfied with the overall story and the resolution. For an introduction to a series, it was nicely presented and held my attention throughout and made me want to continue reading. Now that I've broke the ice with Mayor and his Lt Gunther, I'll definitely be searching the rest of the series. (4 stars)"

Gunther is a police lieutenant based out of Brattleboro, Vermont and head of the detective department. This story starts off with Gunther and his team called out in the middle of the night to attend to a body discovered on the train tracks. It appears like murder as the body was placed strategically on the tracks; with head and hands on the tracks so that the body couldn't easily be identified. As they investigate the case another murder is discovered; that of a prostitute who has been stabbed to death and also of her baby, who has died of exposure in the house.

Thus begins a meandering, at times, investigation of the murders, that might somehow be linked and might involve illegal Hazmat disposal, political intrigue, etc. We get an excellent view of the government in Vermont, and of the state itself. The story delves into the lives of the investigators and we get to know more about them.

I like that the case doesn't get resolved in two or three days but that we get a long realistic investigation, as clues dry up and then others come to the forefront so the investigators can move in other directions. As well, there is an interesting look at a move by the government to update the whole policing structure of Vermont.

All in all, even though at times I got somewhat lost in the story, it was so very well written and described that I enjoyed it very much. Mayor is an intelligent writer who keeps the story moving and holds your interest. Most enjoyable and I look forward to continuing to explore Gunther's life and investigations. (4 stars)"


"The tony ski town of Tucker Peak, Vermont is experiencing a rash of condo burglaries. Normally this wouldn't be a case for Joe Gunther and the newly-formed VBI, but when high-profile people have their high-value possessions stolen, names get dropped and strings get pulled. Turns out it's just as well they called in Joe, since once they begin investigating the case suddenly develops a body count. Between drug-dealing, burglary, financial shenanigans, ecoterrorism, sabotage and murder, there's something deathly serious going on behind the resort's pristine veneer."

"With Joe Gunther and his Vermont Bureau of Investigation team spread thin on assignment everywhere, from the remote dairy county of Northwest Vermont to the slums of Newark, NJ, they're pushed to their absolute limit when a string of serial arsons across the Green Mountain State evolve into the most shocking series of murders the bucolic region has ever known."


"Intriguing plots, complex characters, and a vivid landscape are the foundation of Archer Mayor's award-winning New England thrillers. Now in this suspenseful new novel two investigations will lead Mayor's popular hero Joe Gunther to the shady realm of Internet chat rooms, where relationships are formed and broken, and nothing is as it seems.

News travels fast in the small state of Vermont. In this tight-knit society, police officers and investigators proudly maintain a kinship that transcends the boundaries of their jurisdictions. When an unidentified body is found in the peaceful town of Brattleboro, local police and the Vermont Bureau of Investigation both appear at the scene.

But before investigator Joe Gunther can begin to gather evidence of murder, a family emergency sends him to his hometown, where the lives of his mother and brother have suddenly been threatened. Gunther reaches out to a network of police officers who know him only by name and reputation as he attempts to discover the source of this imminent danger.

Meanwhile, his investigative team chases an elusive murderer who has no apparent ties to the victim. In a state that is more like a neighborhood community, secrets are difficult to keep, and it's sometimes impossible to know who can be trusted. Gunther soon finds himself opposing criminals more menacing than any he has ever encountered in order to save those he holds closest to his heart."

The complete list of Mayor's Gunther series is available at this link.
Posted by Bill at 17:07