It's already the 7th of  October. So far this month I've only finished one book, but I'm making nice progress on my others. I'll update that first book and also the one I've just started. Also since the beginning of October I've had a few books arrive in the mail and also found a couple at one of my local used book shops. I'll update those as well. I won't continue with my look at the Mystery genre in this post but I'll do so with my next ones. 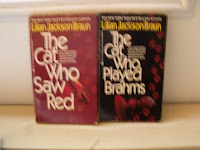 "The Cat Who Saw Red is the 4th book in the Qwilleran and his Siamese cats mysteries by Lilian Jackson Braun, the 3rd that I've enjoyed and so far I think my favorite. For those unfamiliar with the stories, Qwilleran is a reporter for The Daily Fluxion and in the course of his assignments gets involved with a variety of mysteries. Over the course of the stories he acquires to Siamese cats, Koko and Yum Yum, both of whom assist him in solving mysteries an also keep him from getting to badly hurt.

In The Cat Who Saw Red, we find Qwilleran with a new assignment with the newspaper, that being the new gastronomical editor, responsible for exploring the foodies of the city. During his first assignment, he meets an old girl friend who has moved to the city, is a potter and is married. They live in the Maus Haus, a residence peopled with a wonderfully quirky cast of characters. It turns out that there is an apartment available in the building, so Qwill decides it's time that he makes a move in his stale life and therefore he and his canine cohorts uproot and move to new digs.

The house has a mysterious history, that being the unexplained deaths, many years before, of two of the residents. And there are mysterious disappearances in the present day as well. His old girlfriend's cat has disappeared. She tells Qwill that she can't live with her husband anymore and wants to get a divorce. Qwill, somewhat living in the past and with romantic feelings for her still, digs into his limited resources and writes a cheque to help her with her divorce proceedings. Then she disappears. And another person disappears later on.

While Qwill and his cats explore these mysterious disappearances, he also makes the rounds of various eating establishment, on the Fluxion's dime of course, bringing various of the residents with him for free dinners. Of course, Qwill gets this new assignment just as he decides to go on a diet because he's feeling somewhat rotund. How do your write articles on food when you don't eat? What a conundrum!


"The greatest threat to Wellington's Salamanca Campaign is not Napoleon's Army but France's deadliest assassin.  He's already failed to kill Captain Richard Sharpe once.  Now, he's getting a second chance."

1. Time Quake by Linda Buckley-Archer (Gideon #3). I enjoyed the first two books in this trilogy very much.


"The catastrophic consequences of time travel are now impossible to ignore. Lord Luxon has set his sights on the ultimate prize: America, while, abducted to 1763, Peter and Kate begin to understand that history has arrived at a tipping point. Transformed into an oracle, Kate is able to see the future as easily as the past. Gideon does all he can to help, but he is tormented by the knowledge that The Tar Man, his nemesis, is also his brother. As they pursue him through the dark streets of eighteenth-century London, and the time quakes begin, Peter realises that this monster may hold the fate of us all in his hands."

2. In the Evil Day by Peter Temple. Temple is probably best known for his Jack Irish series. I haven't read those yet but will when I get them. This is one of Temple's standalone stories and it sounds interesting.


"The Cold War is long dead but the trade in deceit and lies is still running hot. In Hamburg, John Anselm is hiding from the ghosts he has left behind in foreign war zones. He spends his days working for a surveillance firm. At night he drinks too much, paranoid about the suspicions he glimpses in the eyes of strangers.

In London, Caroline Wishart calls herself an exposé journalist. The story she has stumbled on could make her career or is she playing somebody else's game? Into both their lives comes ex-mercenary Con Niemand, bearing an explosive secret, a secret with the power to topple governments and destroy them all.

A powerful and compelling thriller, In the Evil Day conjures a world where information is more dangerous than explosives and secrets are more important than human life."

3. Jerusalem Inn by Martha Grimes (Inspector Jury #5). I've enjoyed this series very much so far. It's an excellent mystery series.

"A white Christmas couldn't make Newcastle any less dreary for Scotland Yard's Superintendent Richard Jury--until he met a beautiful woman in a snow-covered graveyard. Sensual, warm, and a bit mysterious, she could have put some life into his sagging holiday spirit. But the next time Jury saw her, she was cold--and dead. Melrose Plant. Jury's aristocratic sidekick wasn't faring much better. Snow bound at a stately mansion with a group of artists, critics, and idle-but-titled rich, he, too, encountered a lovely lady . . . or rather, stumbled over her corpse. What linked these two yuletide murders was a remote country pub where snooker, a Nativity scene, and an old secret would uncover a killer . . . or yet another death."

4. Meet the Baron by John Creasey (The Baron #1). I've read a couple of this adventure / thriller series and they were entertaining. I've also enjoyed Creasey's Inspector Gideon  books (written under the nom-de-plum JJ Marric).

"John Mannering (aka The Baron) makes his first appearance in this volume. Lord Fauntley cannot help showing off both his daughter and the security under which his precious jewels are kept. Mannering finds himself attracted to both ....

Money is tight and so he plans a burglary, but this fails and unexpected consequences result. The relationship with Lorna Fauntley flourishes, and a series of high profile thefts and adventures ensure Mannering's future, so he believes, until Lorna equates him with The Baron. One of the many further twists in this award winning novel occurs when the police appear to seek Mannering's help, only to have everything turned upside down as the plot develops . . . . ."

5. Flashman on the March by George MacDonald Fraser (Flashman #12). I've been slowly gathering in this series and have started it as well. Most enjoyable.


"The adventure is set in 1867-8 and starts in Trieste, shortly after Flashman's service with Emperor Maximilian I in Mexico. Flashman then travels to Abyssinia (Ethiopia) and takes part in General Robert Napier's 1868 expedition."

6. Murder at Cape Three Points by Kwei Quartey (Darko Dawson #3).  This is a new mystery series for me. It's set in Ghana.

"Accra’s hotshot Detective Inspector Darko Dawson returns to solve a complex mystery that will take him out of the city to the beautiful coasts of Ghana, where a grim double-murder seems to have larger political implications.

A canoe washes up at a Ghanaian off-shore oil rig site. Inside it are the bodies of a prominent, wealthy couple, Charles and Fiona Smith-Aidoo, who have been ritualistically murdered. Pillars in their community, they are mourned by everyone, but especially by their niece Sapphire. She is not happy that months have passed since the murder and the local police have made no headway in figuring out who committed the gruesome crime.

Detective Inspector Darko Dawson of the Accra police force is sent out to Cape Three Points to investigate. The more he learns about the case, the more convoluted it becomes. Three Points has long been occupied by traditional fishing populations, but real estate entrepreneurs and wealthy oil companies have been trying to bribe the indigenous inhabitants to move out. Dawson unearths a host of motives for murder, ranging from personal vendettas to corporate conspiracies."

Well there you go. I hope you see some books you might like to try. Have a great week.