It's been a reasonably quiet day today. I went for my 'weekly' walk this morning. It was a nice cool morning. I barely saw anybody else out.. mind you it was 6 a.m. Since then I've been reading and Jo and I have been watching Deadline: White House and listening to The New Abnormal. Right now we're watching Millionaire and then Jo will make me watch 25 Words or Less with her. Get my thinking cap on. (25 Words or Less break time.. more in an hour or so.)

Now, moving to my look at the Spy / Thriller genre

Leonard Cyril Deighton is an English writer, born in Marylebone, London in 1929. Over his writing career he has written novels, including spy stories, cook books, history books and film adaptations. I have read 3 of his spy novels so far and have another three to read. Let's take a look at those.


"I very much wanted to like this book as it is a classic movie as well and in parts I did. But ultimately, unfortunately, it kind of just left me feeling sort of blah. I got the gist of the story; brain-washing, infiltrators into the UK spy organization, but it was sort of all over the place. This was Deighton's first story and heralded a great writing career. I do have a couple of other books by him to read and this hasn't put me off, but I do think it could have been better. (3 stars)" 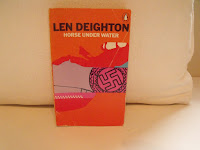 "The Ipcress File was a debut sensation. Here; in the second Secret File, Horse Under Water; skin diving, drug trafficking and blackmail all feature in a curious story in which a dead and long-defeated Hitler-Germany reaches out to Portugal, London and Marrakesh, and to all the neo-Nazis of today's Europe." 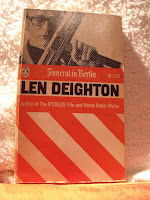 "I enjoyed this story. In some aspects, I had no idea what was going on, but at the same time, it didn't matter. This is a Cold War spy mystery, that meanders along to its ending but is so well-written, that it was a pleasure to read. The basic premise is that the main character, Harry Salzman, a British operative, is in Berlin trying to arrange for the smuggling of a British scientist from the East through the Berlin wall back to the West. But that is the story at its simplest. The tale wanders from London to Berlin, east and west, to Czechoslovakia and France and contains a cast of characters, from Salzman to his capable assistant (one of my favourite characters even if she is only rarely in it), Jean to his boss, Dawlish, the Russian, Stok, etc that you love meeting and enjoy the interactions. Each chapter discusses the rules of chess and various plays and moves and ultimately, this is the crux of the story, a chess game with players feinting and moving across the board until the end. And who will win the game? You have to read Funeral in Berlin. Enjoy! (4 stars)" 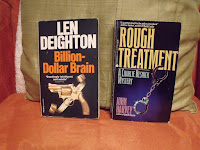 
General Midwinter loves his country, and hates communism. In a bid to destabilize the Soviet power bloc he is running his own intelligence agency, whose “brain” is the world's biggest supercomputer.

With his past coming back to haunt him, the unnamed agent of The Ipcress File is sent to Finland to penetrate Midwinter's spy cell. But then a deadly virus is stolen, and our hero must stop it from falling into the hands of both the Russians and the billionaire madman."

"A 'clinic' on Paris's Avenue Foch designed to cater lavishly for multiple perversions, staffed by a group of sexually and intellectually high-powered girls and equipped with devices ranging from an Iron Maiden to psychedelic truth-drugs that's the set-up operated by the enigmatic Monsieur Daft.
Naturally, it has a hidden purpose: to compile dossiers of tape and film on influential political clients from East and West. Into this twilight world of decadence and hidden motives come the agents of four world powers. Are they after Datt's pornographic blackmail dossiers? Or is their purpose, altogether more deadly than a trip to the blue movies ...?"

"US Secret Service high-up Colonel Mann is the main foil to the British agent in this story, which is set in the Arab world and the wastes of the north African Sahara desert, where our hero is sent to take custody of a defecting Russian scientist, Professor Bekuv. The narrator is unnamed.

Things don’t go according to plan in this story. Loyalty is tested and never certain, as it becomes unclear as the novel develops who is actually chasing whom, and where the threat is coming from." (4 stars)

The complete listing of Deighton's works can be found at this link.

Enjoy your weekend and if you celebrate your long Memorial Day weekend. Take care and stay safe.